At the 2020 edition of the Nuremberg International Toy Fair, Amo Toys was awarded two prizes acknowledging the efforts made throughout the past year. The awards were presented by MGA Entertainment and Zapf Creation during an event at the last days of the toy fair.

Amo Toys was named ‘Best Support Across Brands’ by MGA referring to the distribution work with well-known brands such as L.O.L. Surprise, Little Tikes, Poopsie and more. At the event, Amo Toys also received an award from Zapf Creation as ‘Zapf Distributor of the year’ for distributing strong brands from Zapf in the Nordic countries such as BABY Born and BABY Annabell. 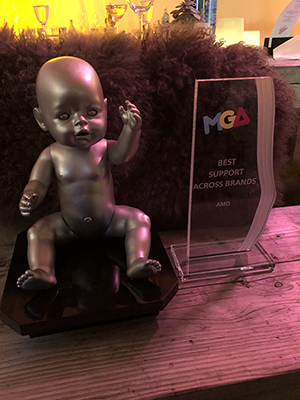